Sexual Tension in the Workplace

Comment are off
The Maple Leaf
asking her out, get that woman out of your mind, Sexual tension, your desire 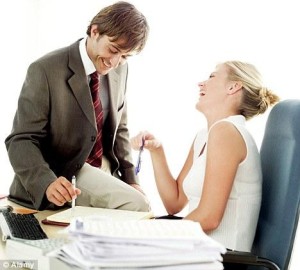 “Getting attracted to your colleague at office is normal”

Sexual tension often blooms in the work place because people spend so much time together, working as a team and accomplishing tasks. It’s also something to think about; no job is so interesting that it wasn’t occasionally nice to take a little time to fantasize about the hot woman down the hall from you. This doesn’t mean that it’s not a problem. However, too much sexual tension can make things really tough. If your workplace isn’t one that bans romance, then you’re in the sticky situation of whether or not to pursue her (or maybe your workplace does ban romance, and you’re going to read this article anyway. Do what you have got to do).

Is She Even Into You?

Sometimes it’s hard to tell “I just want to pass the time, let’s flirt” from “I’m seriously into you, and I wish we weren’t at work right now”. You want to try to make sure that the object of your desire is actually interested in you. If you’ve been flirting lightly for a while, it’s time to take it to the next step. Try bringing her a soda, or a little gift to see how she reacts. Such an obvious prompting will be met with either cool appreciation or much more rampant flirting. 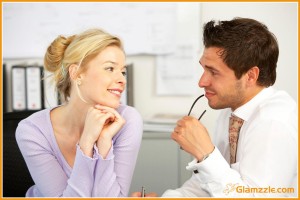 “Beware! She might be there just for some favors”

Talk to her about meeting up outside of work one day. Don’t go with a vague line like “hey, maybe we should hang out sometime”. Use something specific like telling her about this great club you think she’d love that you’d like to take her to and see how she reacts. If she’s enthusiastic, then congrats, you’ve gotten the go ahead.

Don’t Let Her Take Advantage of You

Sometimes, women flirt to get what they want from a guy. That’s not news to any guy who’s ever been the first teenager to have their own car out of their group of friends, but sometimes it’s easy to forget that. If a lot of her “flirting” is really asking you for help with someone, consider whether the help is a pretext for her to flirt with you, or if flirting is the pretext that she uses to get you to help her. Even while you’re considering asking her out and closing the deal, be wary when she asks you for help. Don’t switch shifts with her if you wouldn’t switch for anyone else, and don’t buy her lunch every day if she keeps “forgetting” her wallet. Romance is great, but being a sucker is not.

If you know that she’s not just trying to get you to carry a bunch of heavy boxes for her, and you know that she’s genuinely enthusiastic about the idea, cross over into dangerous territory. Ask her out, and put the moves on her when you can. Sometimes, what you really need to get rid of a temptation is to indulge in it, and that’s what you need to get that woman out of your mind from time to time. Getting rid of the sexual tension in the workplace has never been easier.