Comment are off
The Maple Leaf
don't get hostile, get her attention, interested in long term relationships, saving for retirement 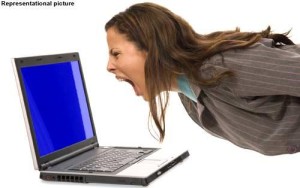 “Make sure not to make her angry with your message”

I know there can be an air of desperation on dating sites. It’s becoming more and more respectable to meet ladies online; there are even specialty sites for everyone from Christians to farmers to make sure you’re both on the same page. However, it’s still easy to shoot yourself in the foot on a dating site before you really get started.

Found the perfect woman on your dating site of choice? Good for you. Don’t start by opening up a message to tell her how sexy she is. Catcalls on the street don’t get you the results you want, and the same is true online. Introduce yourself like a grownup and craft a message that’ll get her attention in a positive way.

First, read over her profile. You will never get a better chance to make a thoughtful first impression than on a dating website. Remember, she’s putting all of this information out there just for you so that you can target her more effectively; she’s practically doing the work for you. Don’t overlook that opportunity to hit her buttons or you’ll end up doing the online equivalent of hitting on a nun: it’s unproductive and makes you look like you don’t know what you’re doing.

“Get to know what she actually wants before you meet her”

Lots of women will play coy at first on a dating website. They aren’t going to tell you they’re looking for a hot night or a short fling; they’ll act like they’re only interested in long term relationships and potential marriages. Don’t let this deter you! Sure, some of them are only looking for long walks on the beach – and some may genuinely mean it when they say they’re only interested in friendship – but just like in real life, lots of women don’t really know what they want until the right guy comes along.

You’re trying to be that guy, right? So sweet talk her just like you would if you’d met her in a bar or at a party. Ask a couple of questions about her hobbies or whatever else she’s listed on her profile. Don’t ignore what she’s got there or she’ll know you’re the kind of guy who’s going to ignore her too.

Don’t push too fast. Let her take the lead online, even more than you would in real life. You don’t have to wait for her to ask you out, but make sure she’s receptive to your conversation before you bother.

I know it’s hard, but don’t get hostile if she shoots you down. This makes you look uncultured and classless, and if you’re not careful, she’ll take screencaps of your profile and turn you into a Facebook meme. Whether you think she’s leading you on or not, remember that a woman you’re not dating is a potential relationship referral. If you’ve impressed her, she might direct a friend to your profile or even change her mind in a few weeks. Like saving for retirement, consider minimal politeness as an investment in your future dating pool.