Comment are off
The Maple Leaf
a cold beer, blended drinks, buying her a drink, saved some money

When you are out at the bar and you see a beautiful woman, the obvious thing to do is to show her that you are interested in buying her a drink. You have seen the scenario in countless movies: a girl sits at the bar, and the bartender slides a drink over to her, causing her to look around for the grateful donor. She sees you, and it’s all history from there. Sadly, it doesn’t always play out like it does in the movies. Women these days are pickier than ever, so you have to carefully consider each drink before you buy it for her.

Beer is the cheapest option, but that doesn’t make it the wisest. While most women love a cold beer as much as men, it doesn’t say much about your opinion of her. If you think that a cheap beer will impress her, then you’re mistaken. For a man trying to pick up a woman, it’s crucial that she knows that you think highly of her. Pay attention to what she’s drinking, and buy her a step up from that. If she has a beer, buy her a smooth whiskey. Show her that you’re willing to pay good money to impress her and chances are she will be much more interested. 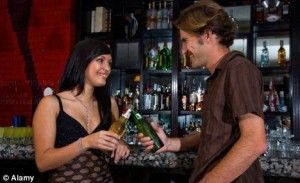 “Buy her a drink that she’ll enjoy”

Mixed drinks come in a huge variety of forms, so there are plenty to choose from. Again, focus on what she’s drinking so you can base your decision on that. If she’s the classy type, she’ll probably be sipping on a martini. Go ahead and buy her another one; if you’re ambitious, switch it up and buy her a different kind of cocktail. She won’t be as impressed if she gets the same drink all over again, but if you choose drinks based on what she already has, then you’ll seem thoughtful and she’ll be thrilled. If you can’t get a clear read on what she likes to drink, buying her a margarita is a good idea. Almost all women adore margaritas, so you’re nearly guaranteed to please her. At certain bars you can also order blended drinks, so if blended options are available, always opt for such drinks. There’s really no logic behind it; women just love them! Buy her a daiquiri of some sort if she looks like she is into fruity drinks, or a mudslide if she has a sweet tooth. Other great drink options include long island ice tea, rum and coke, or the classic gin and tonic. 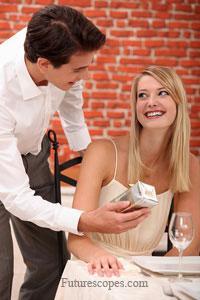 “Ask her before buying her a drink”

Letting her choose involves approaching her before you buy the drink, but it’s the best option. Rather than guessing, asking her will guarantee that she gets what she wants. Going up to her and asking if you can buy her a drink might seem sleazy to you, but it’s actually a great way to see if she’s interested. If she doesn’t want you to buy her a drink, then she’s not interested and you just saved some money!